Grotesque – a floral ornament first used in ancient times. Grotesques consist of plant garlands interlaced with other elements such as human figures, animals, armaments, paintings, fruits and others. Instead of garlands, grotesques can also take advantage of an ornament theme popular in a given period (the so-called framework grotesque).
Grotesque ornament became popular in the Roman art of the 1st century. In modern art, the form was rediscovered when, at the end of the 15th century, explorers found its remains in the ruins of the Golden House of Nero (Domus Aurea) and other palaces and villas (the so-called Roman caves). Soon after this discovery, grotesque was popularized by Italian artists, who also transformed it slightly and adapted to the needs of the times. One of the earliest examples include drawings by Giovanni Pietro da Birago from the end of the 15th century. 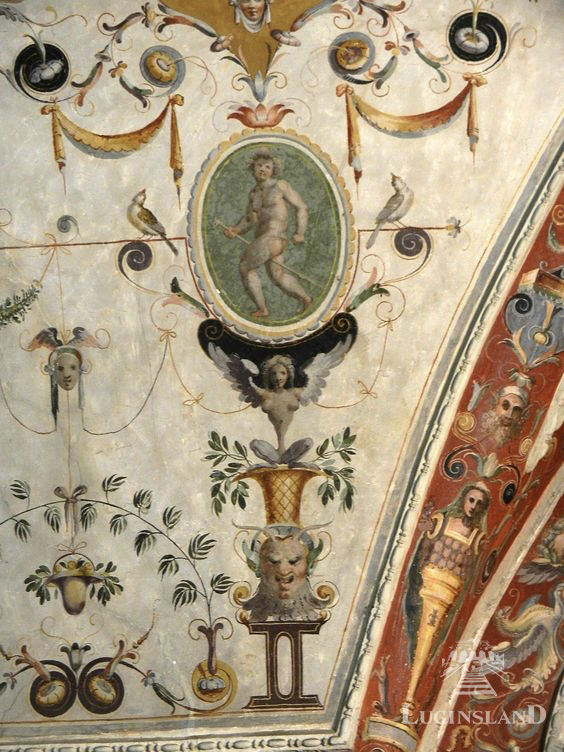 Grotesque elements can also be found in Filippino Lippi’s wall paintings in the Carafa Chapel in the Basilica of Saint Mary above Minerva (Santa Maria sopra Minerva) in Rome, Italy (1489-1493), Perugin’s wall paintings at the Collegio del Cambio in Perugia (1499), Luca Signorelli’s polychromatic wall paintings in the Orvieto Cathedral (1499-1503), in the series of wall paintings by Benetto di Biagio (Pinturicchio) in the Borgia apartments in the Vatican (private papal apartments) and in the Vatican arcades decorated by Raphael Santi (1518-1519). In the 15th century, the word “grottesque” lost one of its letters “t”: the spelling evolved at the same time as the style of “grotesque” changed. The power behind grotesque was the ability to combine all imaginative and fancy forms of ornamentation. It is common to see some peculiar creatures, monsters with tentacles, representing human-animal hybrids. As a consequence, the word itself took on a comic and ridiculous meaning. The basic aspects of grotesque are the negation of space, all elements seem to float, and the presence of hybrid forms, half-human, half-beast or half- vegetation, i.e. whatever the artist imagined. Grotesque art is used to decorate ceilings and walls where large paintings cannot be placed. The history of grotesque includes such artists as: Domenico Ghirlandaio, Raphael Santi and Michelangelo.