When designing the Luginsland complex, Zammit took a “temporary” break from Palladian architecture. The architecture style of Villa Luginsland is not a classicist one with “Maltese elements” and “elements of British Victorianism” but an Italian example of the Neo- Renaissance with Baroque elements. The style of Villa Luginsland does not correspond with any other residential property project by Zammit, in fact, it is significantly different and exceptional. This observation has made us believe that it may have been the baron himself to work on and contribute to the project. According to research conducted by Dominika Rostocka, a Polish architect who is responsible for the historical analysis of the villa, there are multiple correlations and hidden messages in the design and decoration of the building, none of which have been discovered before.

The residence contains numerous spatial reference points, which indicate the fact they were placed here on purpose. The resulting network of points of intersecting axial symmetries determining the geometry of the building was not just a random act of design. As a matter of fact, it is an evident proof of Baron Tucher’s intricate knowledge of not only astrology, mathematics and physics, but also the masonic philosophy which promotes spiritual development and alliance of religions, nationalities and opinions.

Its front elevation shows evident signs of symmetry in relation the remaining sides of the main building. The colours of the original façade referred to luxurious Italian villas, hence they are not characterized by such symmetry or such a decorative layout.
The colour reconstruction presented below shows probable original colours of the facade. The remains of paint in the arcades and on the window joinery indicate their original, diversified colour palette, emphasizing the depth and expressiveness of the design. 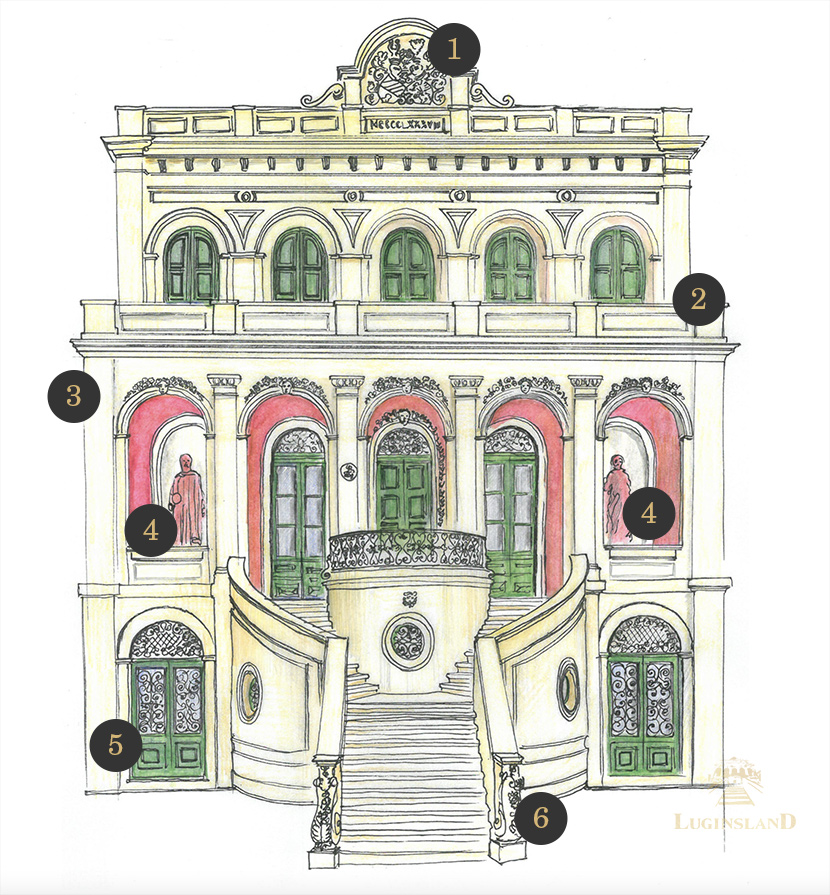 Examining the building in an attempt to unambiguously define its style, we suppose it was Classicism or Neo-Renaissance. Considering that the Neo-Renaissance was an early current of 19th-century Historicism and formally alluded to the Renaissance architecture, the numerous references no longer come as a surprise.

The Neo-Renaissance was most popular between 1870 and 1890, so the time when the Villa was built was the peak period of this trend. Neo-Renaissance forms were considered binding by architects of strict Historicism, although Zammit made them seem softer and differentiated them.

Romantic Historicism, which allowed for a free interpretation of Renaissance, Baroque and Classicist elements was a variation on Historicism at that time.

However, the reference to the historical style most often accounted only for the facade. While in Villa Luginsland, Zammit brought the interpretation of styles also into the interiors.
Neo-Renaissance was very popular in Germany, hence the decision to follow this style.

Majority of buildings erected in the Neo-Renaissance style served as public buildings such as banks, town halls and schools as well as tenement houses. The decision to choose this architectural style indicates that, from the very beginning, the plan was to make the building a representative one.
Along with Neo-Renaissance, Neo-Baroque had developed to became equally important in 1885, hence so many intertwining, richer Neo-Baroque motifs can be found in the Villa, especially when it comes to the polychrome paintings where the influence of these two currents can be clearly seen.

Francesco Zammit, entrusted with the creation of the project by Maximilian, was a local architect who used a style that was a combination of contemporary trends containing elements of Italian, French and British architecture. Zammit left a considerable architectural legacy.

He created the most impressive projects of the late 19th century in Malta, such as Villa Betharram (Fatima House) and the nearby Villino Zammit, Villa Drago and Villa Portelli. Architectural elements of the above-mentioned buildings indicate Zammit’s liaison with the classical style, later called the Palladianism, which the architect enriched with a flair of local details. This is probably why the history of Maltese architecture refers to Zammit as the creator of the “Maltese Palladianism”.
When analyzing his creations, it should be emphasized that Villa Luginsland constitutes his outstanding and exceptional piece of work.

Villa Luginsland is basically a craftily designed, autonomous residential complex with accompanying infrastructure which is separated from the surroundings by a high fence. Its construction was completed in 1887 (the building permit was issued in 1886). The skillfully designed function, compositional axes and zoning of the complex are evident.

The entire structure of the main building as well as those in the courtyard was made of the local limestone, the so-called Globigerina – the unique local building material in Malta.
Globigerina limestone was used to build almost all settlements on the island, as evidenced by numerous traces on walls and buildings. This limestone is quite a graceful and universal material which was used to build majestic fortifications, magnificent churches and palaces as well as ordinary houses.

The architectural order is the first striking feature which draws attention when we enter the property through the main gate. The view of the residence from the side of the gate shows the preserved axial symmetry of the buildings of the complex. The main residential building is situated in the centre of the axis. The buildings to the left and to the right of the main building are identical in terms of style.

The use of such symmetry allows to accentuate and attract focus on the main, residential building, which stands centrally in the middle of the axis. The axial perspective is enhanced by the pattern of the paths blending into the main tract leading to the main entrance of the residence. The effect of optical focus is amplified by the impressive winding staircase leading from the ground level to the main entrance on the first floor. The staircase itself symmetrically splits into two flights that surround a round skylight illuminating the chambers located on the ground floor. The smooth contours of the richly embroidered staircase, found in Renaissance and then Baroque buildings, make it one of the most impressive structures of the 19th century architecture in Malta, as shown in different studies on numerous occasions. 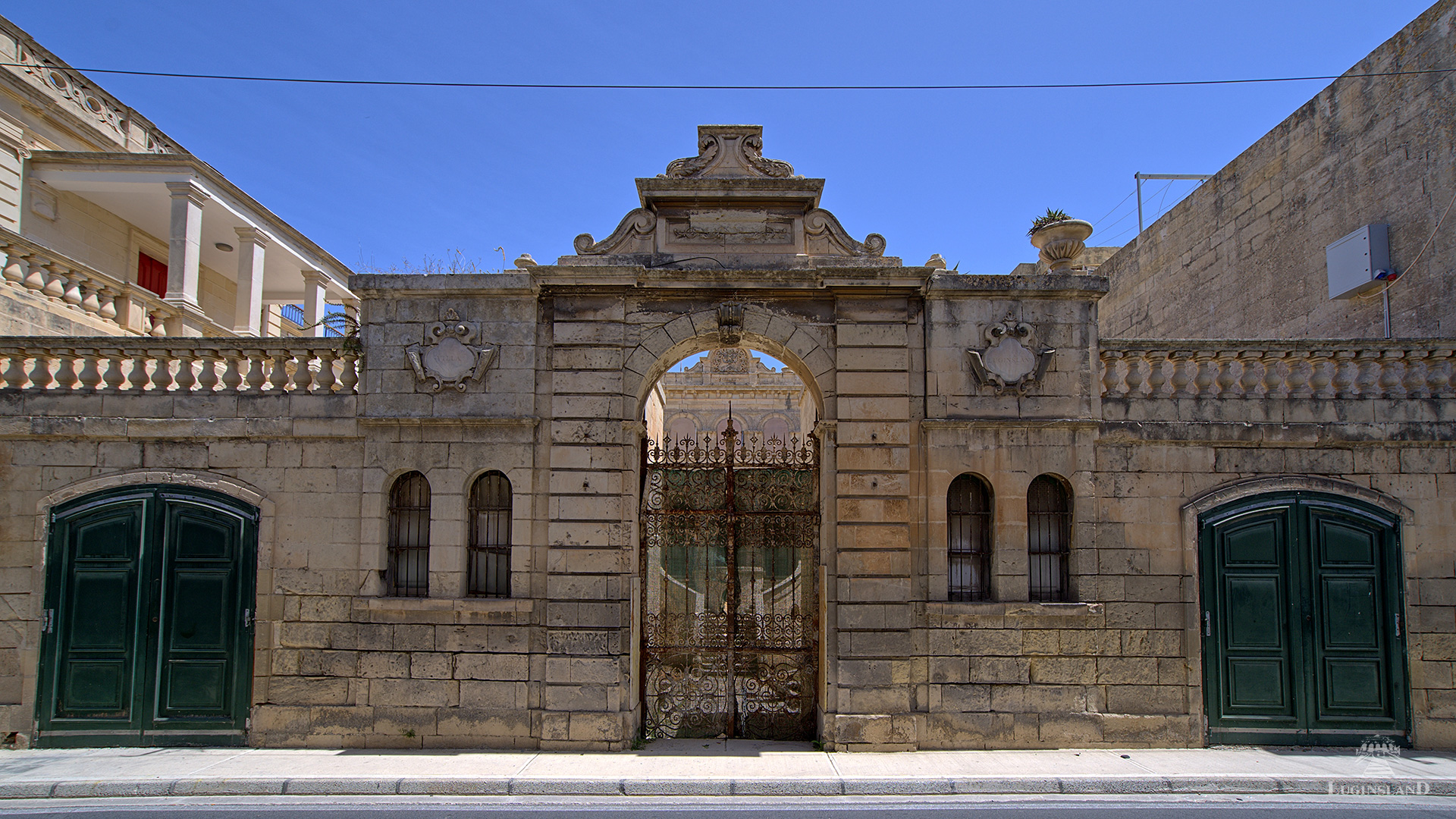 Axial symmetry of the complex

According to the classical rules, the designer kept the rhythm, proportionality of elements and symmetrical division – concepts which affect the visual value of the entire complex and each element separately.
Separate equal quarters and symmetries make the building more sophisticated. One can clearly see the craftily designed optical concept as the proportions maintain a close mutual reference relationship.